Quentin Tarantino. You all know who he is. I don’t need to introduce him. Hates Marvel. He’s not a fan of Marvel. He’s not looking for a job and doesn’t want to direct a Marvel movie because, as he says, Marvel directors are just hired hands, which he’s partially right about.

But he’s also a hypocrite because just a year and a half ago, he talked about how he at one point was very much after a Marvel job.

So, yeah, this came at us from an interview with Variety, where they were asking him about some of the opportunities in Hollywood and whether he would ever want to direct a comic book film, and specifically, what draws him to these big franchises, what pulls him away from them.

Even if they did offer it to him, I think it would be a film that’s just not a good fit for what he does, the type of language he uses, and how he makes his film. His films are great in their own right, but that’s because they’re his films.

So when he said that he’s not interested in directing an MCU film because directors are simply hired hands, he’s right and he’s also wrong. You’re hired, and you’re allowed to put your own spin and creative input on it, but you have to confine to 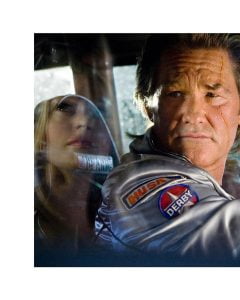 Again, I get what he’s saying, but also what doesn’t sit well with me here is he talks about how Marvel all this and that, children’s and all that.

But if you go back and read the old interview with him that was published about two years ago, you’re going to see that he talks about how at one point, he went to Marvel to talk to them about a Luke Cage film.

This is in the late ninety s, and he talks about how he loved reading Luke Cage Shang Chi, Iron Fist, Werewolf, Finite, Tomb of Dracula, and Blade. So, look, I get what he’s trying to say, and yet times have changed since back in the day, though maybe, when he wanted to do a Luke Cage movie.

But at the same time, it is what it is, right? Quentin Tarantino doesn’t make a lot of films, and a lot of

the reason he doesn’t make a lot of films is because the studios will not just give him free reign to do whatever he wants with a specific IP. Again, coming back to Star Trek, there’s no room in Star trek for the type of film and language that he wants to use, especially the way they present the future.

It just doesn’t work. It’s been one of the main criticisms in regard to everything modern Star Trek outside of strange new worlds because they just missed the point. And I think he argued would have missed the point as well.

See also  Why Steve Jobs Recommended a book To Everyone

So it’s kind of interesting to see him badmouthing Marvel when at one point he was after a Marvel job, loved Marvel Comics, and talked so positively about them. But I get it. Time has changed. Time has passed, and he’s a different person now. So it kind of fits.