Batman GCPD is In Development And NOT Canceled

Batman GCPD is In Development And NOT Canceled

After so much talk in relation to the Gotham City Police Department TV series and how the series was essentially canceled to focus on the Arkham Asylum series, we all thought that they were kind of going to merge it or two, because that was the story. As it turns out, no, the Batman series focusing on the GCPD is in active development. It’s not canceled, and it’s further ahead than anybody thought.

So for those that are keeping tabs on everything,

the Gotham City Police Department TV series that would focus on James Gordon and be set before the events of the Batman leading into the film was the first spin off that was announced prior to the Batman even coming out.

They were actively working on this, but then a couple of things happened where they lost the original writer and I believe even the showrunner.

And then the series we heard was canceled in favor of delivering an archive asylum series which would be set between the Batman and the Batman two.

So naturally, nobody was reporting on GCPD because it was presumed dead up until well, now, where it’s very much alive and actually happening. So, per variety, the series originally ended up evolving into the Arkham series,

and they kind of figured, well, we can bounce back between the two and kind of make Arkham a part of the whole GCP thing we had going.

But as they continued to develop Arkham, they realized that, well, it’s going to

largely be based on Arkham Asylum, so we can’t really involve the GCPD as much. So they went back to the drawing board and actively redeveloped the GCPD series to work in tandem with everything that’s going on.

So if you’re keeping tabs right now, we have the Batman Two in development, we have the Penguin, which is starting production soon.

Arkham Asylum and GCPD all apparently set to start production by the end of next year. And then on top of that, we got four other active movie spinoffs in development. So the Reeves Arkham versus Bat vs. Whatever you want to call it,

is very much alive and well. And it sounds like that the GCPD concept is something that they really want to do because they’re not dropping it, 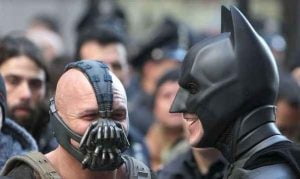 because the original pitch was, let’s show you the crime and corruption in the GCPD and why exactly things in Gotham are so well down in the dumps. And again, there’s something there,

because one of the best TV series of all time, The Wire, does exactly that. It shows you the crime and corruption inside, but also how it’s affecting the community. There’s something here, and I think it’s worth exploring. And certainly they do as well.